As we continue to navigate the impact of the Covid-19 pandemic, we assure our community that the Annexstad Family Foundation remains committed to our mission. Learn more »

You are here: Home / Scholar Highlights / Dubose and Tinklenberg Named 2013-14 Gustavus Student-Athletes of the Year 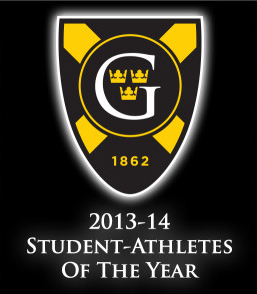 A running back who broke nearly every Gustavus rushing record in his final season wearing a winged helmet, Jeffrey Dubose is the second football player to receive the honor since Ryan Hoag ’03 did so in 2002. Solidifying her place as the most honored swimmer in the history of the program, Alissa Tinklenberg is the first to be named Student-Athlete of the Year twice after also receiving the award as a sophomore following the 2011-12 season. Tinklenberg is the second women’s swimmer to take home the award, following in the footsteps of Andrea Kleven ’04 in 2001.

This year, eight male and eight female athletes were nominated. Once nominations are finalized, they are balloted and voted on by the head coaches at Gustavus.  Coaches vote for their top-three athletes on both the men’s and women’s sides, awarding five points for a first place vote, three points for second place, and one point for third.

There isn’t a whole lot more to be written about the careers of both Jeffrey Dubose and Alissa Tinklenberg that already hasn’t been done so before. Since they both stepped onto campus in the fall of 2010, Jeffrey and Alissa’s careers, all their accolades, the highs and lows, wins and losses, school records, standout performances, and impact on both their respective programs and Gustavus have been well documented.

For head coaches Peter Haugen and Jon Carlson, these student-athletes have been game-breakers, leaders, and model Gusties since day one.  The successes of the Gustavus football team had a direct correlation to what Dubose could do with the football in his hands, and the powerhouse that the Gustavus women’s swimming & diving team has become was built largely on Tink’s ability to glide through the water and win races.